Welcome to the musical meandering insights of Aaron Joy. Here you'll find 600 reviews of CDs & DVDs of rock & metal in all its variations, mainstream & indie. What they all share is that the album or band is unique in some way & not every submission was reviewed. Please share these reviews or link to them if you like what you read. Reviews are no longer being posted (sorry about dead links), but feel free to e-mail Aaron & post comments & he'll respond & also look for him on youtube. (Formerly the Roman Midnight Music Blog) (last update 2/24/2019) 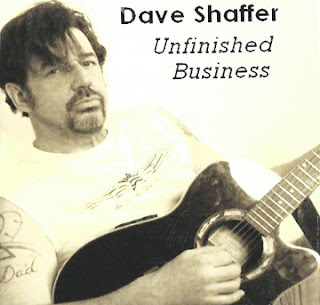 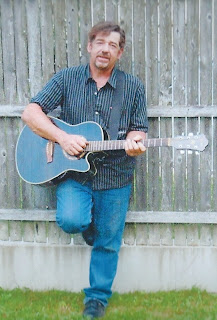 I've found that it's hard to be humorous in music without being stupid or having the joke go stale. But, DS opens his self-released Americana flavored album Unfinished Business with the delightful "Beans At Your Bar-B-Q" about a woman being arrested at a BBQ for having a dozen husbands who passed away mysteriously ... well, not so much mysteriously as she was a cannibal, as DS sings "I know it sounds impossible/that every guy she dated ended up on the table as a casserole." It's a popular & fun tune in his catalog of original songs, but a deceptive one. It makes one think the rest of the album will follow in the same ironic suite, but it doesn't. Actually, it gets lyrically far more serious & somber with numerous songs that are just waiting for a Nashville song-plugger to grab them up & turn them into hits as they have an emotional wallop. If I sang in the country & folk world I'd love to add some of these to my repertoire. DS plays guitar & sings with an Americana, sometimes folksy, sometimes country, sometimes rockabilly flavor, never going to far in any direction & thus this will appeal to a wide audience. Or, if you like Jerry Garcia's post-Grateful Dead days or guitarist David Wilcox you should enjoy this. Unfinished Business is aptly titled as its a thematic collection of songs about loneliness, lives messed up (or in this case a man's life messed up), lost love & lost families. DS has a great talent of weaving together very visual lyrics of people in desperate situations that will bring repeated listens. "Halfway" sings about remaining in our own self-created prisons & falling in love halfway but not completely. The rockabilly tinted "Here I Stand" is about coming back to a relationship after life has changed, & not for the better, with great visuals of being a bum singing "thanks for the spare change, now go home & take care of your family" which is really his family. It's a haunting standout track. The rest of the collection continue with variations on a theme of being broken & lonely, but not so much giving up but certainly moving on. Is it moving on with regret? Not necessarily. Just giving up. Is that a bad thing? Well, the album might have sad lyrics but it's not really a sad album, no more than listening to Doc Watson is sad. It's more like songs of life that DS sings of, life just is. If it helps get your interest, my 68 year old dad heard this album before I did & thought it was great.

(No official video available.)
Email ThisBlogThis!Share to TwitterShare to FacebookShare to Pinterest 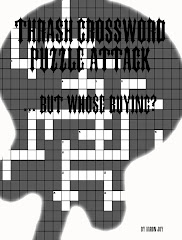 Click here to visit an array of music themed crossword puzzle books spanning the music spectrum, plus other literary efforts. Plus my biography of the band Danger Danger.

FOR THIS BLOG & OTHER WORK:
"Thanks for the support." -- bassist Billy Sherwood of Yes
"Aaron Joy - certifiably brilliant ... You're funny, smart & off the chain, so all I can do is shake my fist at you." -- Matthew Meadows aka Rango (guitarist, podcaster, dancer)
"You are a great interviewer & artist relations guru!" -- songwriter Troy Montgomery (creator of Under The Gun Project with members of Savatage)
"Say what you want about his particular taste but Aaron Joy knows his music, lives it, loves it. The way it was intended to be experienced." -- Peter Tinari (guitarist who worked w/ keyboardist Derek Sherinian)
"You've interviewed guys like Graham Bonnet, yet you still give the chance to us smaller guys to have our voice heard. If more people did that it would certainly be easier to get our music out there." -- guitarist Dan Sorber of Forex Canorus
"That's also why people like you are so important to this indie movement. We need a voice. We need a lot of voices. Not many of us are going to get rich doing this, but we need a place to be heard. This whole indie thing is exploding, but is still in its infancy & infants need leaders to show the way. That be what you are." -- bassist Travis Haugen of Canadian bands Guys With Wives, After All These Years
"Nice interview podcast by the way. As a Savatage fan I don't know how I missed it for so many years! I was stoked to hear your interview with Damond Jiniya! You really did a great job of asking the pertinent questions." -- George Pitcher (Savatage music fan)
"An amazing labor of love." -- Rodney Miles (co-author: 365 Surprising & Inspirational Rock Star Quotes)
"Great work on the blog. You have some really cool interviews up there." -- Alison Taylor (co-author: 365 Surprising & Inspirational Rock Star Quotes)
FOR MY BOOK "DRIVIN' SIDEWAYS: THE STORY OF THE BAND DANGER DANGER":
"I admit that Danger Danger wasn’t a band I was particularly familiar with prior to reading. ... Now that I’ve read it, I feel like I sat down and personally talked with each member. ... Aaron holds back nothing in his honest assessments and critiques of the band, while still presenting the band’s story as their own, from their own words. ... It’s evident the author is a fan; not just of the band, but of many of the band’s members, and that can be heard in his commentaries, historical details, and array of knowledge that can only be had when one truly enjoys the music as well as the people. ... Unique to this writing is the “Closing Notes by the Author.” In it, Aaron shares why this book wasn’t just any old biographical writing; it is a reflection not just of the band, but of something he wanted to do, for a long time, and now set forth to do it. Helping to pull him through the confines of a difficult relationship, 'Drivin’ Sideways' wasn’t just about giving the band a heads up, but also about a mutual achievement: reaching goals, completing things we always say we want to do, but never get around to doing, and accomplishing dreams, even when things seem impossible."" -- Dr. Lee Ann B. Marino (author of Bookmasters blog)
FOR MY BOOK "HEAVY METAL MUSIC FROM THE INSIDE: QUOTES ON BEING A ROCKER":
"You are amazing to me, bro. I have read your book 5 times now & its just fucking killer. A few friends wanna read the book." -- singer Charlie Z of the Militants
"The book is awesome." -- Michael Schermuly (promoter of Ringo Starr & manager of Ruin)
"You applied the industrial music art philosophy to a book? Genius! The way you omit page numbers because they don't work & made mistakes on purpose. It's amazing how much you've embraced industrial music without knowing what it was. That concept of imperfect art for the sake of humanizing it." -- Stefan Klein of Dethcentrik
"Well researched & presented, its something pretty unique, in my opinion." -- Ed King (Head Librarian of Maine Masonic Grand Lodge library)

Who Is The Joyful Gadfly?

Aaron Joy
Portland, Maine, United States
Aaron Joy is a music writer, former podcaster, bassist (upright, electric) and history author ... with a soft spot for Lou Reed, Morrissey and the Bill Evans Trio. He is the author of countless books, music and not, including the biography of the band Danger Danger.

He has played bass in the alt-country band Willy Martin & The Woods, was with the NY metal trio Tired Wings, the NY punk group The Violence, and his own industrial avant-garde music can be found under the name Blank Faced Prophet.

Since 2012 he has been adding to an on-going music themed crossword puzzle book series, the first and only of its kind.

Find his books direct at lulu.com/aronmatyas (or amazon and many online retailers worldwide).

Feel free to e-mail: aronmatyas at hotmail dot com or facebook.com/aaron.joy or find him on youtube.